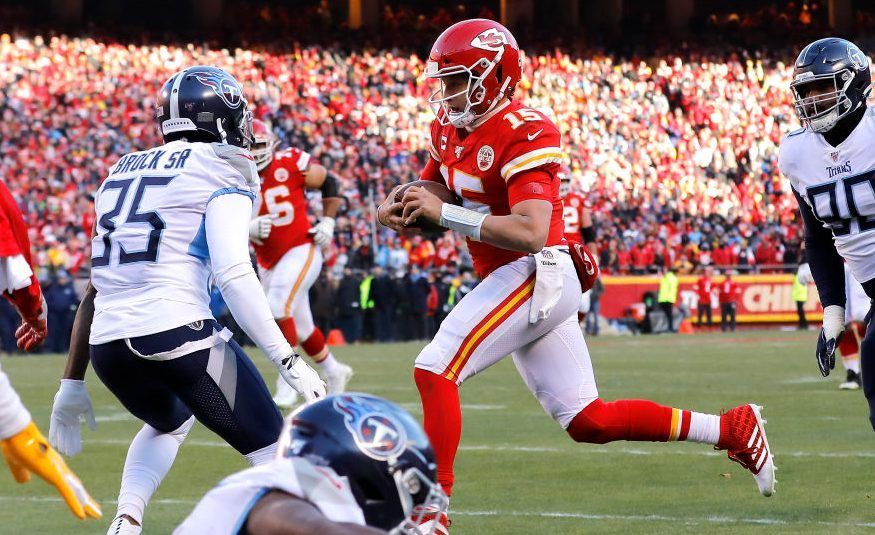 It’s a topic that came up from time to time throughout the regular season, as more and more quarterbacks decided to take advantage or an actual or perceived opportunity to run the ball on a passing play, or via a designed run. In January, Chiefs quarterback Patrick Mahomes has joined the list, and he has led the Chiefs in rushing in both of their playoff games. Fully healed from ankle and knee injuries, he has the mobility to extend plays horizontally and also to take off vertically, as he did on Sunday with a 27-yard touchdown run that covered 64 yards and that featured a head fake for the ages and ugly, flailing efforts by multiple Titans defensive backs to tackle him inside the five.

All too often, defenders get freaked out by the prospect of hitting a running quarterback the same way they’d hit a running back, especially when the quarterback strays toward the sideline or seems to be on the verge of sliding. And some quarterbacks take advantage of that dynamic, acting for example like they’re heading out of bounds and then darting forward for another five or 10 yards when defenders pull up, fearing a 15-yard penalty and/or a fine.

Some defensive coaches take things the other way, constantly reminding defensive players to treat running quarterbacks like running backs. Remember the controversial hit by Seahawks defensive end Jadeveon Clowney on Eagles quarterback Carson Wentz? (Clowney should have been flagged and fined.) That play felt like the product of seeds planted in the meeting room, with defensive coaches showing clips of Wentz pulling the ball down and running it and urging defensive players to take advantage of the opportunity to apply a maximum degree of physicality to a player who at all other times is protected from it. (Clowney’s hit crossed the line when he dropped his helmet and rammed it into Wentz, a protection that applies to all players.)

It’s a relevant consideration as the 49ers prepare to face Mahomes. Surely, defensive coordinator Robert Saleh and the team’s defensive position coaches will be displaying the 27-yard touchdown run, pointing out the various missed opportunities to treat Mahomes like a running back, and ordering the defensive players to not let Mahomes have his cake and run it in Miami.

With more and more talk about Mahomes exploiting defensive efforts to blanket his receivers by running to where the defenders aren’t, it’s a critical talking point regarding the manner in which Super Bowl LIV may unfold. And so we’ve been talking about it. And some Chiefs fans have gotten riled up about it, ignoring the words that were used and hearing what they want to hear.

Here’s my quote from Wednesday’s PFT Live that has placed a burr into the butts of some Chiefs fans: “You know what? At a certain level I think that — and I want to be careful here because I’m not suggesting that they try to knock him out of the game. That’s not what I’m saying. But at a certain point, you trade the risk of 15 yards, if you can send a message. And football is still a physical, violent game. If you can hit him, even if it’s close to the sideline, even if he’s maybe started into his slide. When the championship is riding on it, I think it’s a different analysis. And yeah we may give up 15 yards or half the distance to the goal line. I mean, that’s the thing, Peter. If someone had blown up Patrick Mahomes inside the five, big deal. If goes from the four to the two. Big deal. So, again, I’m not saying that that should be part of the deliberate effort. But the Super Bowl is riding on it. And if this guy’s gonna think he can run through the defense without any physical consequence, they need to dispel him of that notion the first time he tries.”

That’s an accurate, candid, honest assessment of how football works at the highest level. The Saints’ bounty scandal from 2012 has caused players, coaches, and media to tiptoe around the topic, but football remains a very physical, violent game. And when quarterbacks choose to shed the rulebook bubble wrap that applies while in the pocket, they assume the same risk that every running back embraces on every single snap.

If the quarterback runs it once and absorbs the kind of hit that running backs routinely endure, the quarterback may decide the next time he’s considering whether to take off with the ball that maybe he should throw it instead.

That’s the point. The Super Bowl hangs in the balance. Legacies are on the line. Whether it’s Mahomes or Jimmy Garoppolo, the rules still allow a quarterback who runs the ball to be hit like a running back. And if the 49ers hope to avoid being shredded by Mahomes, they need to be willing to hit Mahomes the same way that Chiefs safety Daniel Sorensen hit Titans quarterback Ryan Tannehill when he decided to become a runner on Sunday.

And in the gray areas of the sideline and the slide, yes, the defense may be more willing to risk a foul if it makes the quarterback think twice about trying to pick up some easy yards on the ground the next time around.

That’s a far cry from trying to injure Mahomes, who already has become one of my all-time favorite players. It’s about the fundamental nature of the game, a fundamental nature that has not changed despite the various rules changes that have made the game much safer than it once was.

For any quarterback who doesn’t like that, there’s an easy solution: Don’t run the ball.